The Kimberley region is Western Australia’s northern most region, bordered by the Indian Ocean to the West, the Timor Sea to the North and the Northern Territory to the East.  Spanning over 400,000 square kilometres it is around three times the size of England and has a sub-tropical monsoonal climate. The three largest towns of the Kimberley are Broome, Derby and Kununurra.  Broome International Airport is a major gateway to the region in the West and the Kununurra Airport in the East.

The Kimberley is the northernmost of the nine regions of Western Australia.  Strategically located on the southern margins of South-East Asia and bordered west by the Indian Ocean, north by the Timor Sea, south by the Great Sandy and Tanami Deserts of the Pilbara and east by the Northern Territory.

The Kimberley region covers one-sixth of Western Australia’s landmass spanning 419,558km², twice the size of Victoria, and is made up of six major townships and over 160 small remote Indigenous communities.

The culturally rich region is home to 36,014 people which rises-up by 50,000 during the winter months as many visitors travel here.  The diverse population is made up of 50% Aboriginal people representing over 30 traditional language groups. Over 91% of the land in the region has been determined under Native Title and comes under the control or influence of those indigenous people.

The Kimberley experiences a sub-tropical climate, characterised by a distinct wet season (November to April) and dry season (May to October).  The region is one of the most remote and untouched ancient landscapes on earth, which features remarkable coastal and inland environment, and is home to many unique birds, mammals, reptiles and marine life.

The six major townships spread across the region and in a variety of settings.

Broome is situated along the west coastline, in the semi-arid margin of the canning Basin. With a population of approx. 17,000  people, Broome is a recognised pearling and tourist port town, and a hub servicing the pastoral and resources industries.

Derby is located 200km north of Broome with an estimate resident population of check this. Derby is on Salt-Water country and boasts the second largest tidal movements in the world and is the gateway to the thousand islands of the Dampier Peninsula.

Fitzroy Crossing is located on the banks of the Fitzroy River, approximately 2.500km north of Perth.  With a range of fertile soil types, the area is used extensively for livestock and horticulture production.

Halls Creek comprises of desert country and pastoral grazing land with a number of unique natural attractions such as the World heritage Listed Purnululu National Park and Wolf Creek Crater forming the basis of a tourism industry.

Kununurra sits just 37km west of the Northern Territory border and is a hub for tourism, mining and agriculture including the world heritage listed Purnululu National Park – Bungle Bungle Ranges, the Ord River Irrigation Project and the  massive man-made Lake Argyle, and .

Wyndham is located at the point at which five rivers flow into the Cambridge Gulf and was established in 1886 as a port town which was the principal point of entry during the gold rush.  Today, its port services the growing pastoral and agriculture industries of the region.

Mining and Resources, tourism, agriculture, aquaculture, construction, pastoral, and retail are major industry sectors in the regional economy of the Kimberley.  The region has an abundance of the key natural resources necessary for a strong agriculture and food industry and has 80% of Western Australia’s total divertible water resources, with less than 1% currently being utilised. The unique natural environment which includes the World Heritage heritage listed Purnululu National Park – Bungle Bungle Ranges and RAMSAR wetlands- also provides a strong basis for tourism, attracting over 400,000 domestic and international visitors per year. 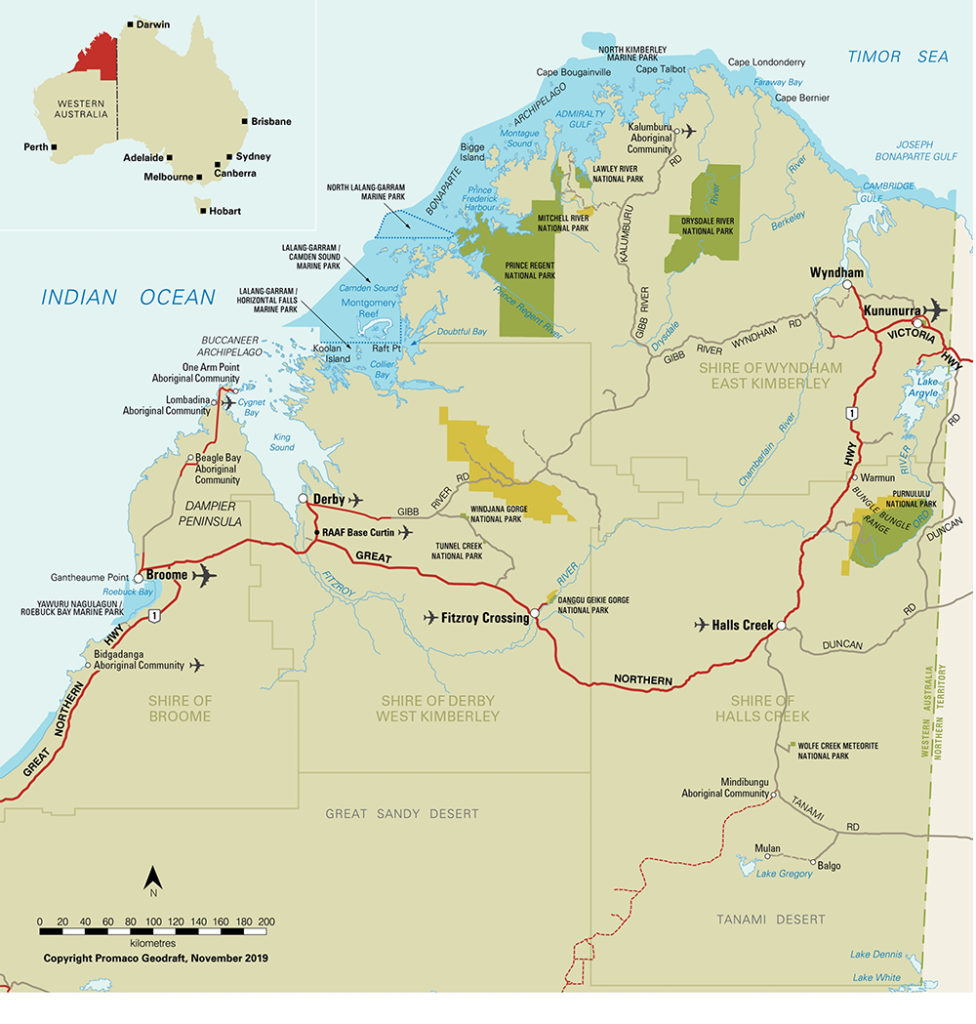 RDA Kimberley plays an active role in supporting our regional community and businesses to apply for State and Federal funding and accessing information on local government funding opportunities.

At RDA Kimberley, we provide advice and assistance on grants and funding opportunities that your organisation or business located in the Kimberley region may be eligible for.

We have developed several resources to help you understand how to best prepare a successful grant application for your organisation or project.

Keep informed on topics relevant to the Kimberley, and find out about grants, resources and other forms of assistance to help your organisation flourish via our newsletter.